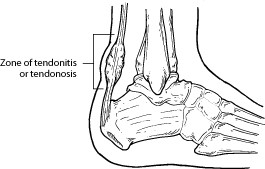 Athletes are at high risk for developing disorders of the Achilles tendon. Achilles tendonitis and tendonosis are also common in individuals whose work puts stress on their ankles and feet, such as laborers, as well as in “weekend warriors”—those who are less conditioned and participate in athletics only on weekends or infrequently.

In addition, people with excessive pronation (flattening of the arch) have a tendency to develop Achilles tendonitis and tendonosis due to the greater demands placed on the tendon when walking. If these individuals wear shoes without adequate stability, their overpronation could further aggravate the Achilles tendon.

The symptoms associated with Achilles tendonitis and tendonosis include:

In diagnosing Achilles tendonitis or tendonosis, Dr. Scheinin will examine the patient’s foot and ankle and evaluate the range of motion and condition of the tendon. The extent of the condition can be further assessed with x-rays or other imaging modalities.

Treatment approaches for Achilles tendonitis or tendonosis are selected on the basis of how long the injury has been present and the degree of damage to the tendon. In the early stage, when there is sudden (acute) inflammation, one or more of the following options may be recommended:

When Is Surgery Needed?

If nonsurgical approaches fail to restore the tendon to its normal condition, surgery may be necessary. Dr. Scheinin will select the best procedure to repair the tendon, based on the extent of the injury, the patient’s age and activity level, and other factors.

To prevent Achilles tendonitis or tendonosis from recurring after surgical or nonsurgical treatment, Dr. Scheinin may recommend strengthening and stretching of the calf muscles through daily exercises. Wearing proper shoes for the foot type and activity is also important in preventing recurrence of the condition.

Office hours by appointment only.